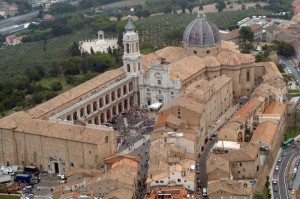 The astonishing city of Loreto, delved in the Marche countryside, owes its fame to the sanctuary where the Holy House of the Virgin Mary is kept and venerated; a sacred place, called by Pope John Paul II the “true Marian heart of Christendom”.
The sanctuary has been for centuries and still is one of the most important places of pilgrimage of the Catholic world. It was visited by about 200 saints and blessed and several Popes. According to an ancient tradition, now proven by historical and archaeological research, the Holy House of Nazareth precisely is the house where Mary was born, where she was educated and received the angelic announcement. The house consisted of a double masonry composed of three stone walls found at the end of a cave carved into the rock itself.
Loreto also is a city rich in culture and artistic works of great value. In the Apostolic Palace has staged a large art gallery which exhibits works of admirable finesse, including masterpieces by Lorenzo Lotto and Pomarancio. The quaint downtown climbs to ancient streets overlooked by shops and craft shops. 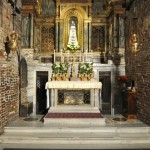 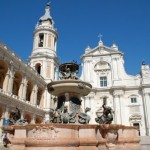