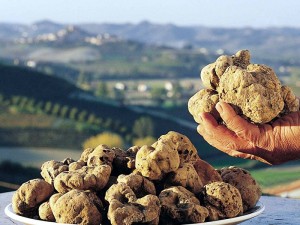 Marche hinterland offers specialities  recogninzed worldwide. The hills between Adriatic  sea and Appennini, with the variety of minerals in its ground, produces exquisites fruits like mushrooms, chestnuts, herbs, legumes, and the main character of the territory: the truffle.
This fruit, called hypogeal because it grows underground, can be found all over Marche hinterland, from Piceno through Sibillini Mounts of Macerata, to montefeltro lands, where the three main cities, Acqualagna, Pergola and S. Angelo in Vado, design a precise border to the production zone of the most precious truffle of all Marche region.

Varieties of truffle with its harvest period:

You probably noticed that several species of truffle above mentioned have Vittadini after their latin name: Carlo Vittadini was a great botanist and mycologist from San Donato Milanese, who lived in 1800 and described 65 different truffle species in his Monographia Tuberacearum; 51 of these species was completely unknown before he discovered them, that’s why they bring his name.

How it is made
Few years ago, truffle were not cultivated but used to be found in woods, by experts called “cavatori”, but mainly by their dogs, trained with truffle flavoured bread or cheese till they were puppies. Also pigs were used and, in some east regions, they still are.  Others  great truffle diggers are wild boars, but they are rival to men, and are able to dig the ground with their fangs in order to find truffles for their own sustenance.

How it is preserved
It is usually preserved in glass or plastic vacuum-sealed containers, in which they are introduced wrapped in absorbent paper. They need to be periodically checked and paper is changed every day if necessary; truffles is made of water for its 80% and should be consumed in ¾ days if fresh.
Another method suggested by a “cavatore” consists in using rice: it absorbs humidity and truffle smell, so it can be used to prepare a wonderful “risotto”.

If you love this hypogeal mushroom you cannot miss a visit to Acqualagna, main truffle capital. All its surrounding area, rich in oaks, is the perfect milieu to the growth of the precious white truffles, black truffle, “bianchetto” and “scorzone”. Acqualagna is the only area that offers all the variety of truffle all year long, and in the harvest periods, fairs and trade shows offers an opportunity to taste and buy to lovers from all over the world, togheter with local cured meats, cheeses and wines.
Truffle fairs in Acqualagna:

National fair of white truffle, that takes place during weekends in October and November;

Regional fair of precious black truffle, that takes place during the penultimate Sunday of February;

Pergola’s precious white truffle fair in October;
National  show of truffle in S.Angelo in Vado, from 11 of October to 2 of November.

Truffle has various uses: natural, in slices to flavor every dish, from eggs to pasta, otherwise you can use one of the various product truffle flavoured: oil, cream, sauces, dressing, cheeses and cured meats.