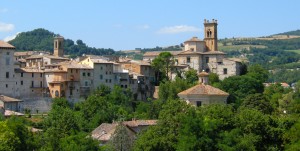 Pergola maintains the medieval urban structure and, in addition to the presence of numerous churches, monasteries and places of worship (it is also known as “Pergoletta Santa”) the city presents several civil buildings of great interest as the stronghold and the town hall. However, Pergola is definitely known throughout Italy and internationally for two excellencies: the food, which includes the white truffle that has become the star of the “National White Truffle Fair of Pergola and Typical Products” – held every year for three consecutive Sundays in October – and the gilded bronzes.
Being the only group of gilded bronzes from the Roman period that came to us almost intact, the group represents two pairs: two female figures with two knights of rank with their horses, which would seem to portray a whole family of high lineage somehow linked to Marche region; although, who specifically is represented and the date of their construction are still to be discovered. 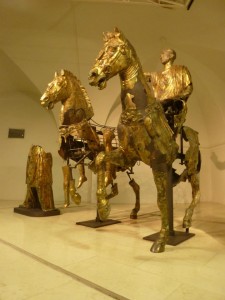 The museum, called “Museum of the Gilded Bronzes and of the City of Pergola”, is located in the former convent of San Giacomo and consists of two rooms: the first is the art gallery with paintings and wooden furniture from the eighteenth century, while the second is the archeological room, featuring mosaics and tombs of the Roman period found in the area. Finally, the museum closes with the long-awaited hall of Bronzes from Cartoceto di Pergola.

The bronzes, all completely broken, were discovered in the basement of the town of Cartoceto in 1946 by two farmers, and after more than 10 years of restoration and reconstruction of more than 350 pieces, we can now enjoy a horseback rider almost complete which would seem to be an official military, while of the second rider on horseback nothing remains but a few fragments. Similarly, of the two female figures one representing a lady in old age was almost completely rebuilt, as of the second only the lower part from the waist down remains.