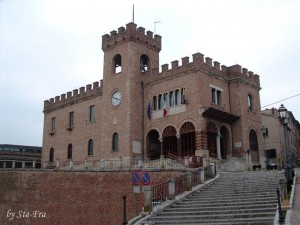 In the ancient village of Mondolfo, ranked as one of the most beautiful villages in Italy, you can visit the charming old town over the Civic Museum, located inside the monumental architectural complex of St. Augustine.
Within the museum you can retrace the various historical stages of the city and you can admire unique pieces such as the original red jacket of a partisan of Mondolfo, or the extraordinary hour machine, a great work of Marche engineering dating back to the mid-nineteenth century, and there is also a room that pays tribute to the historical production of accordions of Mondolfo. Like most of the medieval villages of Marche, Piagge also retains its original castle, still surrounded by fifteenth century walls. The castle has a square within hosting a bell tower, symbol of the city. Recently, outside the walls an interesting cave has been found, which still has not revealed its use, but is certainly interesting: it is accessed by sandstone stairs, and immediately shows symmetrical rooms decorated with geometric reliefs, which suggests a place of initiation or chivalric esoteric purpose. San Costanzo adheres to the National Association of Polentari of Italy together with 16 other historical groups from all over Italy; the aim of the association is to disseminate and promote regional simple dishes of the tradition, particularly polenta. The enhancement comes through a festival that is held every two years in one of the municipalities belonging to the Association, it has reached almost the two hundredth edition, and it is therefore an historic celebration!
During the festival each group has its own plate of polenta cooked according to tradition, each region with a different sauce and dressing, such as beef sausages and codfish, mortadella from donkey meat.
Each town serves tasty and rich in history dishes .
In San Costanzo you can attend both the winter version of the festival held in March and the summer version in July, if you love polenta and gastronomic traditions you cannot miss this unique union. This small town hosts a very interesting and unique historical museum: the Winston Churchill Museum.
In fact, on August 25, 1944, the British Prime Minister Winston Churchill was visiting Montemaggiore Al Metauro with General Alexander to control the troops in the valley of Metauro and overseeing the offensive and the attack to the famous Gothic Line (German defensive line) .
In memory of that day and that visit, memorabilia and memories of World War II were collected within this unique and fascinating museum: brooches, weapons , uniforms , documents and photographs , including a photograph of Churchill and Alexander turning their back to look at Metauro Valley, with rows on the background

The Winston Churchill Museum is located in Roma street at the former church of S. Maria del Soccorso .
For visits by appointment please contact the following numbers :0721 895312 – 0721 895036