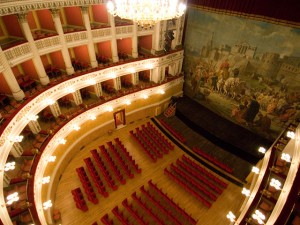 The Theatre of Fortune, which has the ancient Palazzo del Podestà as façade, and overlooks the beautiful and charming Piazza XX Settembre, was built between 1845 and 1863 by architect Luigi Poletti Modena, thus going to replace the famous ancient theater of the same name built by the famous designer and scenic artist Giacomo Torelli of Fano, since the structure was declared unfit for use.
Today’s theater, in the summer of 1944, during the Second World War, was severely damaged and, fifty-four years after its forced closure, was reopened to the public in the spring of 1998, completely restored, although it retained the old look .
Very beautiful and appreciated is the neoclassical hall of the shows that counts ca. 700 seats and has three rows of twenty stages in protrusions degrading in withdrawal and capable of a gallery in the balcony. It is equipped with every comfort and decorated with exemplary refinement.
Under the auditorium of the theater were brought to light the remains of two Roman mosaics polychrome with emblems in geometric decorations.
With the new theater designed by Poletti, there was over romantic opera before and realistic then, by Rossini, Bellini, and Donizietti Verdi, Gounod, Bizet and Massenet, Wagner’s “Lohengrin” from Catalani’s “Loreley “and” Wally “, Puccini, Mascagni, Leoncavallo, Giordano and Cilea, the Zandonai’s” Francesca da Rimini “.
Tradition in the field of dramatic art is still very strong, with the representation of hundreds of classical and modern works, played by actor and actresses of national and international fame.