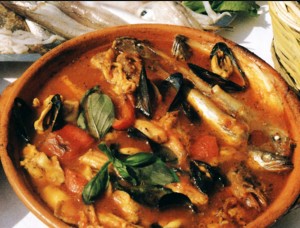 The “brodetto” (broth) is a soup of fresh fish caught in the Marche coast, there are four variants filed and formalized by the Academy of broth, an association formed to preserve and enhance this preparation: the soup of San Benedetto, Porto Recanati , Ancona and Fano.
In general a fish soup must include at least three varieties of fish: fish for soup, such as capone fish or rockfish, fish for sauce, like the surmullet, the boccaincava or goby sliced fish such as dogfish. Also you usually add some shellfish such as mussels, clams, raguse, scallops, squid, octopus and some crustaceans such as prawns, scallops and shrimp. Other key ingredients are tomatoes and tomato paste, garlic, onion and parsley.

The broth of Fano, as probably every Marche broth, was born from the need of fishermen to exploit the fish too small to be sold and used for the preparation of a good hearty dish.
Assuming this historic requirement, it is easy to imagine that for the preparation of soup of Fano there is no precise recipe, there are guidelines that indicate the terms and variety of fish to be used but in reality every soup follows the seasons and the availability of variety of fish from the Adriatic, you can then choose between: shrimp or mantis shrimp, prawns, crabs, squid and cuttlefish, squid, fish redfish, boccaincava, weever, monkfish, red mullet, gurnard, hake, mazzola, race, or dogfish, saint peter fish and sole.

Fry the chopped onion in a little ‘extra virgin olive oil, add the tomato paste, deglaze with a little white wine vinegar, start adding all crustaceans that with their shell will become tasty and bake for 5 minutes, just after the cuttlefish (if suitably large cut into pieces) and squid, just fry everything (the squid will begin to curl). Add enough water to boil all the fish, add salt, pepper and continue adding big fish cut into slices and, at last, smaller fish such as sole, mullet or other reef fish that will cook for a short time, just the last 10-15 minutes to prevent their meat splits apart during cooking. All that remains to do is to prepare a few slices of toasted bread and taste the soup very hot!

When you talk about fish soup, you have to think of other succulent soups that are usually served as hot appetizers such as tarantina mussels or gratin ones, clams in white wine and parsley, the sea snails in porchetta, but especially in the coastal strip that runs from Ancona to Fano the famous garagoj!
In Fano, Marotta and Senigallia, they are called garagoj, in Ancona spreaders, but the real name of this gastropod mollusk is Aporrhais pespelecani, this sea snails are very specific, they are caught only in this part of the coast and you can taste them especially in Marotta during the festival of the same name (which is held every year on 25th of April), where they are cooked with the sauce, the famous garagoj soup, a unique speciality !
Garagoj have a particular form, the place where they are located in the mollusc is conical and has around shaped frame cockscomb, their preparation is rather laborious because in addition to the various washes in water before cooking, they have to be removed of the bits of the ridge, in local slang “scacchiate”, otherwise it would be really difficult to eat them. Additionally the tips are truncated to allow to extract easily the mollusc in order to suck in it from the base. Only after these long operations cooking can begin and also in this case, as with fish broth, tomato paste is used, while fennel, bay leaf, thyme and garlic are used for flavoring.
These exquisite snails are excellent just cooked but the next day they are even better!
Serve between hot appetizers before a fish soup or as a main dish, the garagoj attracts every year gourmets from all over Italy!