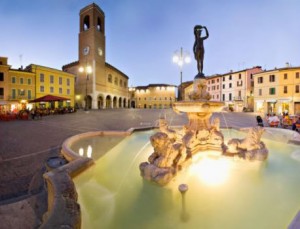 Located in the coastal plain between the rivers Arzilla and Metauro, Fano has been indelibly marked by the passage of two civilizations: the Roman and the Malatesta ones. The mighty walls built by Rome, the medieval architecture, Renaissance and Baroque, the typical views of an environment of fishermen give the city a unique mark.

Important Roman colony under Augustus, in the Middle Ages Fano was under the domination of the Byzantines, Lombards and Franks. Since 999, it was dominated by the Church of Rome. Free town for a long time, it was conquered by Malatesta in the late thirteenth century.
After the middle of the fifteenth century it became property of the Church and suffered the bad government of the Vicars unable to quell the continuos civil unrest. A ring of walls still surrounds part of the Roman area, bounded on the south-east from Via Garibaldi and set to the typical orthogonal system. The birth of the Piazza XX Settembre as civic heart dates back to the age of the municipality.
Fano obtained a new military-religious aspect thanks mostly to the mendicant orders, who built their convents in the city, and to Malatesta, who devoted themselves to the enlargement of the walls.
Unfortunately, the stretch towards the sea and the Rocca are the only remains of the Malatesta defence system; the other sides were demolished during our century. 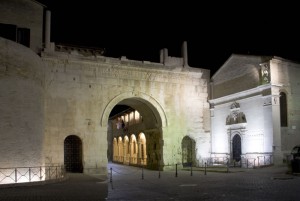 The Augustan walls, interrupted by cylindrical towers, are welded to the great Arch of Augustus in light travertine, and give way to even lower entrance, the “Gate of the Herd”, an evocative ruin that introduces us in the public gardens. The historical center reminds of a world of mighty people, which provides us with material for a complete journey through the history of architecture: from the Middle Ages of the Palace of Reason, to the Renaissance Malatesta Palace, the late Baroque Montevecchio Palace. The large square with the Palace of Reason, today Fortune Theatre, the New Civic Tower (1949) are samples of the stylistic variety of the city. Unfortunately, the stretch towards the sea and the Rocca  are the only remains of the Malatesta defence system; the other sides were demolished during our century.

Roman Fano
The visit to Roman Fano begins with the Arch of Augustus, a symbol of the city, whose construction dates back to 9 A.D., then continues along the Augustan walls, built by Augustus and came to us intact in its two-thirds. Next stop is a visit to the archaeological area discovered under the church and the convent of St. Augustine, where you can admire majestic walls alternating with columns, arches and small windows. A section of the museum inside Malatesta Palace too is dedicated to Roman times, containing remains and discoveries of the time.

Malatesta Fano
The visit of Malatesta Fano begins with Porta Maggiore (in front of the Arch of Augustus), made in 1227 by Pandonlfo III Malatesta and then restored and modified several times.
Nuti Bastion (named after the famous architect Matteo Nuti) was connected to Porta Maggiore during the fascist period. Since the 30’s the area was used as a public garden and known as “Rome Gardens”.
Along Arco D’ Augusto way there is the Romanesque Cathedral dedicated to Santa Maria Assunta.
The Cathedral, built during the twelfth century, is a remarkable testimony to Romanesque, and on the facade stands out the beautiful portal surmounted by a rose window. Inside the church there is also an antique pipe organ of 1909, restored and fully functional.
The third leg of this journey is Podesta Palace overlooking Square XX Settembre, also known as Palace of Reason, built in 1299 in stone and bricks. It is open by four harmonious four-lancet windows and today hosts the Fortune Theatre. This theater particularly deserves a visit: originally built in the mid-nineteenth century, it was completely destroyed during World War II; later it was rebuilt and restored keeping intact styles and neoclassical decorations; its reopening is dated 1998 and since then it is possible to watch a rich theater season.
Next stop of the tour to discover Malatesta Fano is the visit to the tombs of Paola Bianca Malatesta and her husband Pandolfo III Malatesta; magnificent late gothic carvings adorn these tombs located inside the former church of San Francesco, with the tomb of Bonetto from Castelfranco, court physician. Malatesta Fano ends with a visit to the Palace and the Rocca. The first is accessed through the Arch of Borgia-Cybo, the Malatesta Palace (XIV-XVI century) consists of several buildings and is characterized by an arcade wing with magnificent two-lanced windows in cotto tiles and a part with loggia probably drawn by Sansovino.
The beautiful courtyard hosts nowadays a theater, while the Rocca, built by Sigismondo Malatesta, is placed in the defensive zone with wide moat and only some exhibition halls can be visited. Renaissance Fano
The Renaissance path consists of 5 stages, the first is the Church of St. Michael (now deconsacrated) and the Lodge with 5 arches on columns, which is located next to the Arch of Augustus, and has probably  some of its marble fragments reused in it. Afterwards you get to the sumptuous Martinozzi Palace, built in 1564 by the Martinozzi family, a beautiful building with an imposing façade built on the ruins of the ancient Church of St. Maurice, of which you can still see clear traces. Walking along the Malatesta defensive walls you reach the Bastion of Sangallo, designed by Luca Sangallo in 1552 . The bastion is decorated with an important papal coat of arms. The tour continues at the church and cloister of San Paterno, dedicated to the patron saint of the country; made in the sixteenth century, the church houses the relics of the saint. The last stage is to the Church of Santa Maria Nuova, which preserves important paintings, among which the altarpiece by Perugino depicting the Virgin enthroned: the lower part of it – the dais – has been attributed by some to Raffaello Sanzio.

Baroque Fano
The Nolfi Chapel is located inside the Cathedral and was given in concession to the patricians Guido and Cesare Nolfi, who had transformed it into a sumptuous chapel since 1604, full of decorations and frescoes. The Fountain of Fortune is located in Piazza XX Settembre, it is a large marble bath with lions celebrating the luck that gave the city its ancient name: Fanum Fortunae. The bronze statuette of the Fortune goddess overlooking the fountain is a copy, while the original one is now on display at the Civic Museum.
The eighteenth-century Montevecchio Palace is a must-see, since it is one of the largest and most impressive patricians palaces of Fano, a palatial building with a large window on the first floor above the entrance portal and a high and spectacular staircase. The Church of San Pietro in Valle closes the path: it is one of the most beautiful baroque churches in Marche region, the decoration of the dome are noteworthy as well as the many paintings now kept in the picture gallery. The Archaeological Museum and the Art Gallery are housed inside the fifteenth century Malatesta Palace. At the entrance of the Art Gallery, climbing the stairs you come across in the original statue of Lady Luck that was placed in decoration of the Fountain of the Fortune. The gallery is on the first floor of the building and is divided into three rooms where you can see works by Michele Giambono, Giovanni Santi, Il Guercino, Palma the Younger, Simone Cantarini, Giovanni Francesco Guerrieri, Mattia Preti and Bartholomew and Pompeo Morganti from Fano . The museum collects works that depart from the XIV century up to the twentieth century, both from local schools like the Bolognese, Roman and Venetian one. The museum ends with a section dedicated to ceramics dating from the fourteenth to the nineteenth century and numismatics.

The Archaeological Museum is located on the ground floor of the building inside of Malatesta Palace, before entering into several exhibition halls, guests are greeted by a magnificent black and white mosaic depicting a panther of the second century. A.D. . The route passes through six different rooms that trace the prehistoric, proto-historic and Roman period, you can admire stone artifacts, household objects, amphorae, statues, bas-reliefs, mosaics in black and white and remains of cotto-tiled floors. Did you know that…

Fano is mentioned in the Divine Comedy, in Canto V of Purgatory, in some triplets that bring the story of Uguccione of Cassero, magistrate of Fano who probably knew Dante in Florence during the battle of Campaldino against the Ghibellines of Arezzo. Uguccione was assassinated on his way to Milan, which had become Podesta. Because of his bloody death, Dante places him at Purgatory.
The tomb of Uguccione of Cassero is located in the Church of San Domenico in Fano, under the protection of the Virgin Mary of Milk.